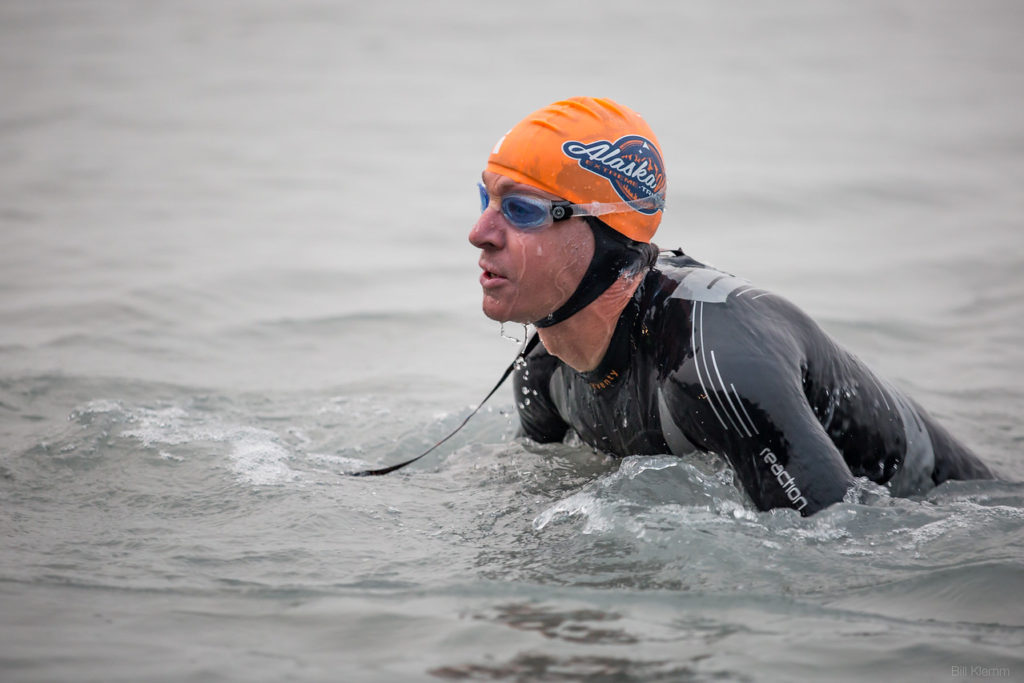 As the stars happened to align this year I set my sights on tackling 3 extreme endurance races over 3 consecutive weekends. Alaskaman 2019 well and truly started the show!

Low and behold, after 32 hours of travel I arrived in Anchorage 3 days before the race. On the midst of their biggest ever heat wave, race day was 28 degrees. There were huge bushfires raging burning a 50,000 sq ft area of Forest. From Anchorage to Seward, a distance of about 200k the air was thick with smoke. A respiratory hazard had been declared throughout. Scenic, magestic mountains were hidden by smoke, instead I was “told” Alaska had mountains.

A mandatory part of this race is a support crew. Thankfully the amazing Alaska Tri Club introduced me to Scott & Jen. These two rockstars were my tour guides, sourced a fantastic Chiropractor (Dr Trevor Tew @themovementclinic), my roommate and my pre race sounding board. They helped in transitions, drove after me on the bike, shovelled food in my face and ran the last 16k by my side!!!! This experience was possible without them!

“I tried not to garner the attention of any orcas”

Alaskaman 2019 takes advantage of the almost 24hr daylight with a 2am transition opening, a 330am bus to swim start before diving into the 10 degree water @ 430am. The only wildlife were a few sea otters playfully splashing about. My fellow neoprene clad seals and I tried not to garner the attention of any orcas. For this swim, the strong outbound current is too much for swim bouys and with a point to point swim sighting is literally the shore and the bright lights @ swim exit.

The swim was solid. Cold was a complete shock to the system but once the hands and face were numb, the wetsuit, neoprene cap and booties took care of the rest. The cold reminded me of a freezing winters rain stabbing any exposed skin, but my core was warm. On exit (about 1 hour for 3100m) there was no frostbite, was happy to jog to T1, unzip the wetsuit and I ditch the long sleeve jersey in favour of short sleeves for the hot day ahead.

Getting through this swim was my biggest fear of the day. Knowing it was conquered, time to have fun… Exiting the town of Seward under a smoke gazed sky I gradually passed other competitors all clad in mandatory reflective vests. Rules for the bike were simple “it’s an open freeway, most deadly road in America, stay as far to the right of the shoulder as possible, keep your head up and watch for debris.” The “shoulder” varied between clear, traffic control divots, landslide debris, loose gravel and earthquake repaired roads. In some sections it appeared a coal truck had dumped its load. It was in stark contrast to the final 22k of beautiful coastal trail winding through the forest. The only catch for this section was the mandatory bear spray….

Some 5:40 and 181km later dismounting the bike I’d survived the highway. I avoided bears, had clambered my way into the top 10 and was excited for the monster ahead. Taking time in transition, I left for the first solo part of the marathon (28.5km). I set off with 2L of water and plenty of cliff bars and chews for 3 hours.

The meaning of track

Potentially one of the biggest mistakes of the day came about by a language barrier. Thinking that a “track” meant dirt I set off in my HOKA Speedgoats from the gun. Unfortunately the “track” was a concrete path then the dirt road was heavy packed and dusty for the first 12+k. Potentially running in my softer HOKA Clifton’s could have been a bit more forgiving early on. I used the 9’/1’ run/walk strategy early and it felt great, time to hydrate, hydrate again and eat. Turning onto the beautiful winner creek trail about 7k of single track magic complete with a hand trolley where you pull yourself high across a river while suspended in a little metal cage.

Unfortunately the next turn onto the Nordic loop was just 8k’s of ugly. A 4K out and back loop where between the constant up and down, loose shale and pounding heat I was left praying for the end. Luckily after getting beaten by the Nordic loop it was only 2k back to transition, a chance to see my smiling crew, completely restock my hydration, drown a coke and pick up my super support runner Jen to “tackle the mountain.” This first 28.5k section took about 3hrs. In the temperature extremes and heavy smoke I consumed close on 4 litres of fluid. Just trying to consume enough calories left me clamoring at the aid station.

Looking skyward the mountain made my aching legs hurt even more although there was only 16km to go and in 7th place overall- it was going to be a long 16km….

Bouyed by Scott and Jen’s fresh energy, Jen and I started our hike. Almost any vertical meant a hike for me however, that slowed pretty quickly when we picked up an unwanted companion less than 1500m in. A black bear started stalking our moves, chris crossing just behind our path. Jen, an Alaskan native, brilliant obstacle course racer and seasoned outdoors person, felt threatened. So much so she had the bear spray out, safety off and finger on the trigger. This shot her heart rate skyward and the warning bells were firing. I’d kept my eyes forward focusing on completing this 228km adventure yet I was loosing my shadow. Between the bear and her now racing heart rate Jen had started to drop behind. Race rules state you cannot continue alone. Pausing, waiting and slowing down was our only way through. Bears can be a heavy load to carry.

Above the snow line, we had our second wildlife encounter. A female moose and her calf only 10 feet off the path. Not wanting to be charged by Mrs Moose as only the previous day we were warned Mrs Moose with calf is more deadly than a bear, we waited. Letting Mrs Moose and her awkward, gangly calf walk off into the snow was possibly one of the coolest things I’d ever seen in the wild.

Only 7k to the finish

Heading towards the summit saw us ever climbing and crossing the snow at least 5 times. The handful of snow inside my cap was a great way to cool down, yet the only white and fluffy stuff I’m used to is sand. I think crossing the snow I was more awkward than the moose calf. Seeing sightseers just below near a chairlift highlighted the final aid station for the day. Only 7k to the finish! Making a bee line for it we missed a turn, added another super steep trail & snow climb into our day but got there.

After summiting we crested a sheer ridgeline who’s vertical drop incited very conscious footsteps heading to this final aid station. The decent from here wasn’t much easier, the pounding of the decline combined with loose footing and ridiculous fatigue took away any surge in speed. Scott, our support crew captain, was a welcome surprise as he bounded up the trail checking in. Providing some more hydration and most importantly a banana- it was the most amazing piece of real food I’d had in over 10hrs.

The dirty dozen and stairway to heaven

Jen and I made ready for the infamous North Face loop which in winter is a double black diamond ski run, in summer it bears trail sections of switchbacks known as the dirty dozen and even a “stairway to heaven.” Between the bear and the climbing Jen’s heart was cooked. On the very first part of the ascent she slowed, our hike had become a slow walk. After stopping twice to wait she forced me to go solo. Knowing this was against the rules I was slowing the walk down, zero running just hoping she’d catch up.

Climbing “the stairway” I was stopped by a mountain rescue guide who’d been on the lookout for me. Jen had been picked up by another mountain rescue and just couldn’t get going. It was off to medical for her before a trip to the hospital and an ECG. Meanwhile I perched on the side of Alyeska, staring at the snow capped mountains around me having a wonderful chat with my mountain rescue mate. Even though I had less than 3k less in the entire race I couldn’t continue. So we sat, ate some food, learnt all about the mountains, but wasn’t allowed to continue the race.

Then, came my new angel and her knight in shining armour. Christine, leading the female field with her husband as support, was climbing the stairs and thankfully they allowed me to hitch a ride. We now were technically “sharing support” for the final climb and descent to the finish. I was fixed at the hip- we had an amazing conversation on the way down. Whether we finished 5th or 6th we didn’t care. However, as it was only through her kindness I could continue, it was a privilege to finish in her shadow, to feel her excitement and share it only seconds later.

5th male across the line and 6th overall in a little over 14hrs in a day. Only 56 people finished Alaskaman 2019 all together yet the position meant nothing. This was never a race, it was a challenge, an experience and it lived up to it in every way!!

The kindness, compassion, warmth and love of people I’d never physically met who opened their hearts I’ll never forget. Friendships forged in a few days I hope will last a lifetime. Here, people matter and experiences count way more than things. Time, position? It’s just a number. The chance to swim, ride and run Alaska? To have intimate, deep conversations with amazing people, to sweat, hurt and share in a moment, to see and be humbled by Mother Nature and see her beauty – PRICELESS!!

Captain Cook found Australia in 1788 and I’m glad I followed his footsteps right up Turnagain arm into Alaska- the final frontier. Physically, spiritually and emotionally it’s an amazing place and was an amazing experience. I’m forever grateful I was able to be here, right here connected in this moment.

Dr James Staciwa Newcastle Chiropractor, husband and father. He has been practising Chiropractic in Newcastle for 16 years. Launching Transitions Chiropractic in 2013, their vision is to help the community Live Life Without Limits.
PrevPrevious4 Stretches for Sciatica & Lower Back Pain
NextReach The Stars By Midnight- Canadaman 2019Next